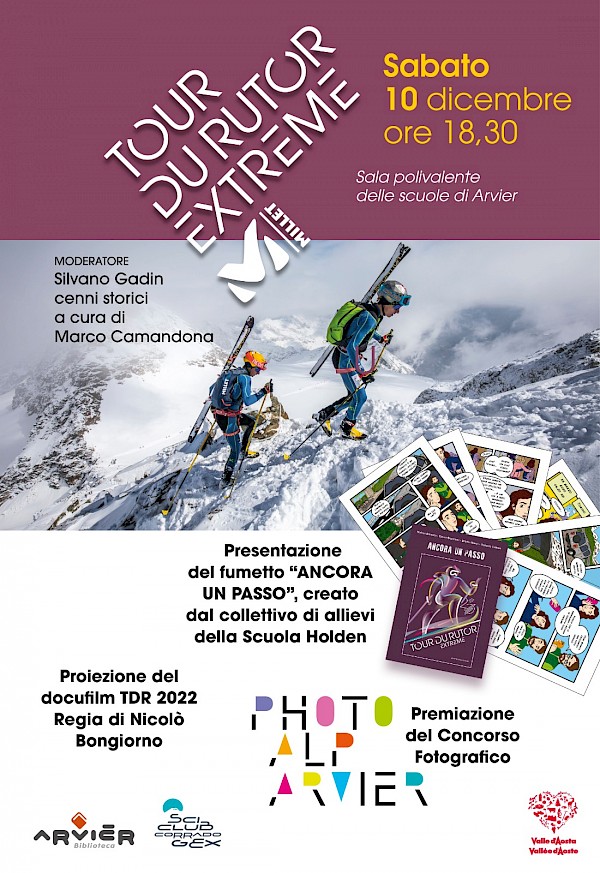 Registrations opened for the “Millet Tour du Rutor Extrême 2020”, the ski mountaineering race that is worth the season. A challenge designed to become legend. The Long Distance Ski Mountaineering World Championship in pairs will be staged from March the 31st to April 2nd , in the Aosta Valley mountains of Arvier, La Thuile and Valgrisenche. Three days of epic challenges at the edge of the sky, 75 km of real off-piste, 40 km of ascent, 32 km of acrobatic descents and 5 km of aerial ridges. It will really be an “extrême” competition. An authentic skialp race, beautiful to run, fantastic to follow. Great champions and daring athletes are expected on the Rutor massif for the single Italian 2022 stage of La Grande Course, the course of the most prestigious ski mountaineering competitions in the entire Alps and Pyrenean mountain range.

An important edition, the twentieth since the birth of the event. An edition that represents the restart, after two years of pandemic: “When it was time to stop, we were the first to do so, cancelling the 2020 edition. - declares the technical director, Marco Camandona, ski mountaineer and mountain guide - Now, with the same attention for safety and taking the necessary precautions, we are ready to start again. Sport is important for the physical and psychological health of people and athletes who consider it as an important part of their life. Together with La Grande Course circuit and with the Federation, a safety protocol has been worked out in order to guarantee the complete protection of athletes and professionals. Those safety rules will be common to all the legs of the competition and will then be declined considering the restrictions in force in every different country. “.

In addition, in the race pack, each athlete will find a specially made technical item of clothing celebrating the twentieth anniversary edition offered by the main sponsor Millet Mountain. Athletes who will participate in the race and accompanying people who need to stay overnight can contact the facilities available in the area going on the dedicated page of the official website tourdurutor.com/ospitalita/

The setting up of the “Mountain Village” has been confirmed; it will draw the most important sport companies to Arvier, and represents a real meeting point for athletes and outdoor and mountain enthusiasts. The “Photo Contest” is also yet confirmes; it will give the opportunity to professional and passionate photographers to take the “perfect shot” along the race course and to show it in a wonderful open-air exhibition in the village of Arvier.

The Millet Tour du Rutor Extrême organized by the Corrado Gex Ski Club of Arvier, under the technical direction of the ski mountaineer and mountain guide Marco Camandona, is one of the most spectacular and modern biennial ski mountaineering competitions in pair. The event exists thanks to the contribution of the Aosta Valley Autonomous Region, the municipal administrations of Arvier, La Thuile and Valgrisenche and to the involvement of numerous private sponsors.