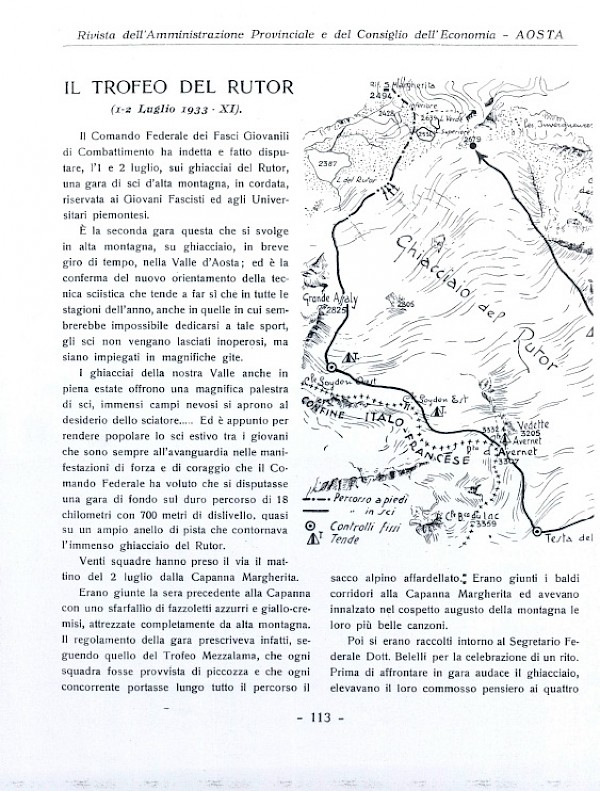 The Tour has a recent history, it was born in 1995 by the will of Sci Club Corrado Gex arvier and some young mountaineering enthusiasts. But if we go back in time and go back to that 1933 that saw the first edition of the glorious Mezzanine Trophy (May 25-28, 1933) there are some surprises that also concerns the Tour du Rutor. On the wave of the competition that still engages the athletes from the Matterhorn to the Rose was held on 1° and on July 2 also the rutor Trophy, a high mountain ski race in roped by three competitors equipped - according to the rules - with ice axe and a heavy Alpine sack. Organized by the Federal Command of Youth Fighting Bands and reserved for young fascists and university students in Piedmont, 20 teams took part on a ring route (18 km of linear development, 700 m of altitude difference) that winds around the Rutor glacier. After the night at the Santa Margherita refuge (2494 m in the Commune of La thuile), at the base of the Grande Assaly massif, the athletes climbed the Loydon hills (west and east), Avernet and attacked, along it, the crest of the rutor up to the Defey hut (3373 m)The climax of the race. The descent finally reached the bases of Château Blanc and Flambeau. The moral victory went to the fascist miners team of La thuile composed by Alberto Chenoz, Francesco Chenoz, Bartolomeo carrel who, out of race, completed the course in 1 28’M 42”. The Trophy was the prerogative of the team A of the Federal Command of Young Fascists of Aosta composed by Giovanni pellissier, Antonio gaspard (who in patrol with carrel and maquignaz had already won the mezzalama), Antonio Hérin, young mountain guides of valtournenche, with the time of 1 35’M 47”.

The Tour du Rutor, now in its 20th edition, can be considered in all respects – despite the variation of the route and the ideological distance that separates them - heir of the old rutor Trophy, the second high mountain ski race ever held on the glaciers of the Aosta Valley. We like to be able to re-establish an ideal contact with that 1933 from which the new orientations of the ski technique that today we call ski mountaineering took place. 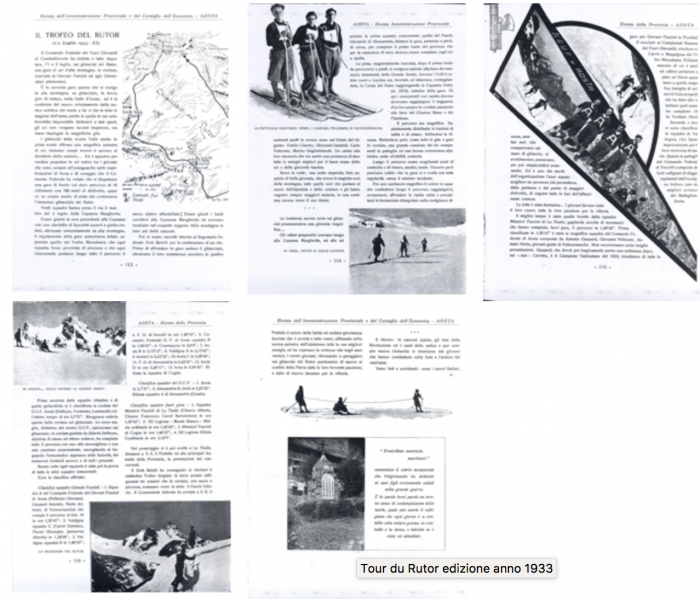